Are you a BIPOC woman writing a high-concept thriller set against an elite or luxurious background? We want to read it! #mswl #WritingCommunity

I LOVE murder (thanks Chucky, Freddy, and Lifetime!) mysteries. I want less “psychotic/psychopathic/sociopathic” killler (most people who have psychotic episodes or who are sociopathic are NOT killers or criminals) and more emotionally motivated killers PLEASE!!! #mswl

(3) inspired by Far From the Madding Crowd, I really want THE LOVE SQUARE to become a thing! When there are 4 not 3 involved in a tangle of romance and drama, with whatever mix of genders. There is so much mayhem to be had! Such higher stakes than the triangle of yore! #MSWL #YA

Attention #YA writers! A few things I’d love to see in my inbox:
1) Millennial nuns (I’ll always be waiting for this one)
2) 20th cent. historical set during one of the dictatorships in either Chile or Argentina
And one more that deserves its own tweet....#MSWL #wishlistwednesday

Just want to make #mswl twitter aware that I love astrology, occult, spiritual, self help books & went to namaste bookshop pretty much every week pre-covid (not to ~brag~)- here’s pics of my beloved tarot of the gnomes set for fun:

overall: I represent mostly-adult, mostly-fiction across the literary-commercial spectrum from weirdo short stories to "book club" novels to historical fiction to trade romance. I *rarely* read thrillers or hard SFF. You can query me right here: aevitascreative.com/contact/ #MSWL

prose-forward crossover speculative fiction that traffics in "what-if"s, wonder, & what the inimitable @clarebeams calls "the living strangeness of the world" #MSWL

Big moves! 📚📖🤓 I'm excited to continue the work of helping writers build artistically satisfying & financially sustainable careers; bringing new stories to readers; and pushing for positive change in a world that needs our words & our work now more than ever! pic.twitter.com/Ufq2MC4IRS

While I have you here, it seems like the perfect time for a little #MSWL! First & forever: queer joy! BIPOC joy! joy for people with chronic illnesses! joy for disabled people! joy for people whose bodies we don't see on TV! 🌈

Have a polished, unique sci-fi romance under 70k for adults? I'd love to read it. #MSWL #writingromance querymanager.com/query/1611

Have a polished, unique paranormal romance under 70k for adults? I'd love to read it. #MSWL #writingromance querymanager.com/query/1611

Here at Brandylane, we are constantly looking for books that speak to the breadth of the human experience. On our #MSWL we would love to see some submissions from queer BIPOC.

Having a hankering for some "sci-fi" narrative nonfiction, e.g. send me your SpaceX and dark matter scientists, astrobiologists, extragalactic astronomers, and archeoastronomers! #mswl🧑‍🚀🚀🛰️ 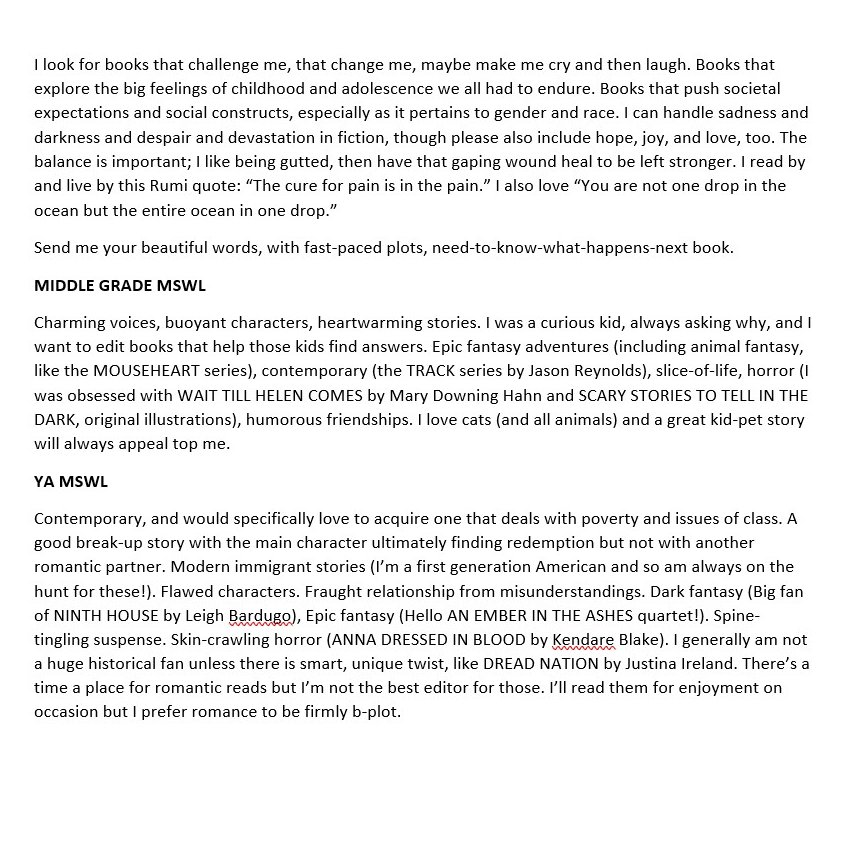 Just finished SEX AND VANITY and am desperate for submissions packing luxury/glamor, with a swank sense of place. Send me your books set on islands, in fancy hotels, chi-chi holiday hotspots. Bonus points for that + suspense a la the brilliant SAINT X. I need an escape... #mswl